Suggested blogposts
Moe: The Creation of

What makes an icon successful? And then how does one go about implementing that knowledge? An icon is a mascot of sorts that is a company’s way of creating an emotional interface with their customers. An icon like Tony the Tiger not only gives a recognizable images that represents Kellogg’s Frosted Flakes, but it also unquestionably links the brand with a persona through which the company can communicate with their audience. A good mascot is more than cute, well-modeled or accurately drawn—a good character causes the user to really connect emotionally with a simple illustration. Unconsciously, all the time, we are empathizing and interacting with the simplistic, humanoid models around us; we anthropomorphize in order to find emotional context in the technology we are constantly confronted with in our everyday lives. As technology continues to far outpace the average humans’ ability to understand it, it becomes more and more of an imperative to reconnect the cold interface of advanced technology to human emotionality. The trend we see of companies presenting their users with visual items to personify the ‘personality’ of the company marks a move into a more interactive, satisfying relationship with technology.

A couple months before the summer of 2013 started, I got an email from a man named Varun with an email address i didn’t recognize. Being accustomed to spammers targeting college students with fake job offers, I skimmed over the email at first, moving on to more pressing emails from professors. What caught my eye in the email was the name Jen: a student who attends the same university as me whom I had met up with to have lunch a month previous. She had gone to middle school with my older sister and when we discovered we were going to the same university, across the country from where we had both grown up, we decided we needed to meet up. I had talked with her about how I was confused about what my job opportunities for the summer would look like -I was a sophomore Math and Fine Arts major and I had never had a real ‘business’ job. It turns out that Jen knew Varun and had brought my name up to him. So quickly I was whisked off into phone calls and interviews. It became apparent to Varun that he had an opportunity in hiring me that he had perhaps not considered for this summer. As a mathematician with some programming experience I would be able to work on smaller projects that needed to get done and as an artist I would be able to revamp the current mascot and really do him justice. Varun explained to me in my interview how important it was to have this connection to your audience and how his current panda mascot might need someone just like me to step back and reassess the situation. This was incredible. I was going to be able to pursue my two passions in one job, something I simply had not expected due to their differences.

So I started with an animal (the panda), a name (Moe), and a couple of articles on the basic psychology of mascots. I knew pandas were fluffy and adorable but I wanted to understand what Moe meant to us and what we wanted him to stand for. Varun’s vision for OpenCurriculum was an incredible one, something that in today’s world is more than needed. Students spend hundreds of dollars on textbooks that they use for one school year and then never look at again. Even with textbook sell-back rates, which are at a fraction of the original book’s three-figure cost, people who can’t afford to are losing money on education everyday. OpenCurriculum aims to open up textbook resources to all users, hopefully making it globally easier for students to learn. So Moe stood for change, he stood for hope and hard work, as well as determination. Moe needed to be there to usher users through the process and make them feel comfortable in a perhaps trying situation. As an artist, I already had a small idea of what it would mean to infuse one little drawing with this much character, but quite frankly, I had never worked on anything like this before. From the perspective of a creator, mascots are especially difficult: if I spent enough time with any model, I would develop an emotional bond, create all sorts of personality traits in my head to accompany the little creature I had brought into being. But in reality, I needed to hit a perfect balance of an initial emotional connection as well as long-term enjoyment on the part of the user. Not only that, but this particular mascot, meant to act as a guide through our website to a wide range of students, needed to be a character accessible to users of different maturities and backgrounds. In my research (and from my personal experience) I found that younger students tend to desire an authority figure that they can put their trust in while teenagers prefer a cute younger character to entertain them while absolutely not infringing on their independence. So you see, Moe needed to be older and younger all at the same

I started very abstractly, open to and pursuing all options of which I could conceive. I attempted to experiment with a diverse range of shapes, ages, weights and demeanors. Consulting my directors in the project, Varun Arora and Zeinab Mohamed, allowed me to expand my perceptions of what visually signifies a panda. Having a diverse set of minds working on the project together greatly helped the development of Moe. I would draw up 15 or so versions of Moe and tape them up on the wall; Varun, Zeinab and I would look at all of them together, selecting the elements that were successful and dismissing those that were not. 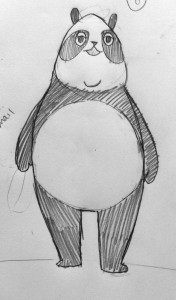 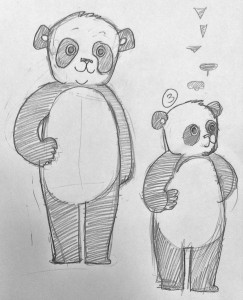 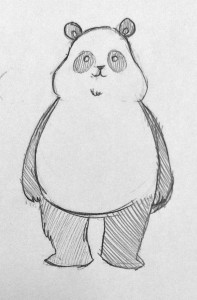 The original discussions revolved around what the feel of Moe was going to be and what just naturally appealed to us on first looks. We decided fairly quickly that Moe should not look overweight to avoid having a look of laziness while keeping in mind that if he was too skinny he just wouldn’t be a panda anymore -we were looking for the golden ratio of panda plumpness. Next came a wave of more developed Moes, that started to hint at what we were looking for along with the idea of a toolbelt- an accessory that Moe could pull on to interact with his users. It also gave a clear message to the user that he was ready to do some work. 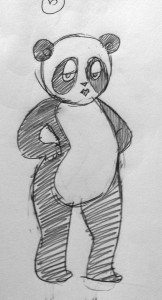 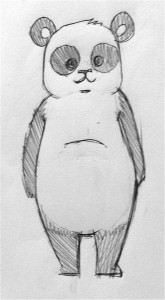 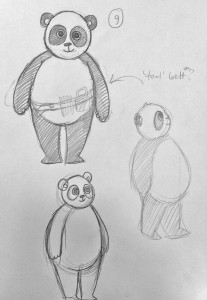 Fairly quickly we settled on a body that was the perfect collection of characteristics we desired: his legs bend under his soft and pudgy belly; arms hang down from his sloping shoulders by his sides, fingers curled close to the body, ready to direct and patiently waiting for the user to require his services. We knew his head would rest high on his shoulders, to keep him looking alert instead of sleepy or disinterested. 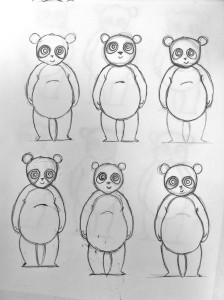 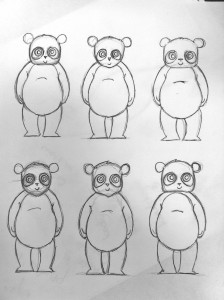 What took the most time was deciding on the specifics of his face—would he have big round eyes resting low on his face or small beady ones in the top half of his face as a panda does? Would his nose be of the triangle variety or include details of the curvature of a real panda’s nose? Head shape also became a topic of controversy.We realized to move any further we really needed to see what our customers would say.

At this stage of the process I developed a simple 30 second survey to check in with the outside audience—all three of us, Varun, Zeinab and I already had a clear idea of what appealed to us personally but it was time to open the discussion up to the outside viewer: the real users. The survey was tremendously helpful; I was able to analyze the results and figure out what was really working for our general audience. Trends like big eyes and a chubby face were characteristics that did well across the board. Taking this knowledge we decided to go forward with a round head shape, eyes centered, with sloping, egg-shaped black patches around his eyes. We achieved a good age-ambiguity in this respect while still making him adorable for the older users. 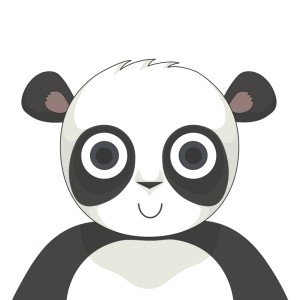 I feel that we went about the whole process of Moe very smartly, allowing the different themes that appealed to each of us to lead the direction of Moe’s progress. Moe is a panda you could converse with—his human-like features and form allows one to empathize with him and ultimately learn to care for him. We as a team wanted Moe to embody openness, fun and the desire to help. The next step is going to be creating Moe mannerisms to really solidify an attitude about him that appeals to all. It was a pleasure to get the Moe project off the ground and to its current point and I hope to see much success in his, and OpenCurriculum’s future.

Varun Arora
Laurel Michel-Schrottman is a 2013 summer intern at OpenCurriculum, working on the mascot and integration with YouTube content