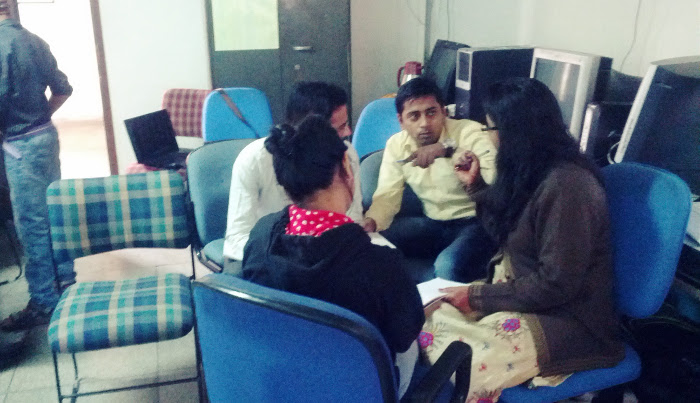 One group taking part in a publishing process activity

During the first two weeks of December, we conducted a series of workshops on building and converting K-12 textbooks in ePub 3.0 at the Central Institute of Educational Technology at NCERT in New Delhi, India. This was in continuation of the process assistance we have been providing the government body and world's largest publisher with the largest known textbook digitization effort in the world. Our goal with this post is to share some elementary understanding of where some of the challenges lay, and more-so, the choices of workshops we made to try to fill some of these gaps.

Here's some more context into our involvement: CIET has been spearheading really innovative initiatives at India's NCERT, such as NROER. NCERT is the body responsible for the research and publishing of the national curriculum (here, textbooks) used in a large number of grades all throughout the country in public and private schools. One of CIET's major undertakings is a project to convert every single textbook they have written in 4-7 languages across all grade levels, into ePub 3.0. That's over 400 textbooks, each written in multiple languages. Due to the relationship between CIET and NCERT, this isn't a one-time effort; new non-ePub versions will continue to be released in 3-year cycles and the process will more-or-less be repeated.

The advantages of textbooks being in ePub 3.0 go well beyond the immediate utility of being mobile, web and e-reader-ready. The move to such a format is a move to openness and a move to the commons. This brings huge new possibilities with remixing and adaptation. Thus far, our work was limited to recommending the best process to the local team because of our inability to be on-the-ground for extended periods.

Now, we often use the phrase "conversion to digital" when we refer to such textbook conversion processes. The use of the word "digital" is interesting; because aren't these mass produced print-layed textbooks in some digital publishing format to begin with? In this case, we are working with thousands of PageMaker chapter files and hundreds of thousands of linked and embedded assets. However, because print layouts are so fundamentally different from how the fluid web works, the best reusable digital artifacts that can be produced from these files are PDFs. Content in PDFs are very difficult to manipulate, even for the technical folk. PageMaker, or now Adobe InDesign, is accessible to a very minute segment of designers and publishers. And that's why the need for conversion into something more open and re-usable turns out to be quintessential for remixing. We believe this has big implications on teaching and learning in the decades ahead.

Where CIET was at

Our first goal was to identify what the local team (of about 12 people) were doing to begin with, and then understand where they were struggling the most. It was instantly clear that the existing process was largely manual and assisted by existing ready-made open source tools out there. That said, the amount of work that the team had been able to pull off thus far was beyond impressive. Rigorous targets and the lack of the luxury to automate easily brought about a chaotic yet fulfilling process of getting a lot done in little time. They made unscalable look like scalable.

Budgets apart from team salaries were non-existent; so custom development to buy automations was not an option. Fortunately, almost every team member had a lightweight IT background, and had written a small amount of Java or PHP code in the past, so there was a small opportunity to automate. Without experienced software engineering talent to guide such efforts, however, this opportunity gets reduced to merely understanding how to debug repeating hairy issues and make minor tweaks using simple scripts. Which can also be extremely time-saving.

We ran the actual workshops all-day throughout the second week of our time there. These were conceptualized and prepared AFTER the first week of needs analysis, leaving very little time for perfecting them. We split the sessions by two self-explanatory tracks: "Content Architecture" (CA) and "Content Engineering" (CE) (a way of splitting human resources in digital publishing that I learned at Inkling). Several sessions were for both the tracks. Below are the names and purposes of these sessions.

Apart from picking tens of inter-cultural learnings, the sessions were a humbling reminder of the power automation and engineering can bring to these processes. It also reminded everyone that while curriculum building was something teachers did, in the digital world (in this case, ePubs), a fair amount of technical expertise was required with the current state of technology to get decently far (even for the technically-savvy).

If you are interested in this problem and helping the CIET team with this initiative, please drop us a note at hello [at] opencurriculum [dot] org!