What is a Transposing Instrument?

It is easier for musicians to play together, talk to each other about music, and share written music with each other, if everyone agrees on the same names for each pitch. The most widely used standard is called concert pitch. Used in most genres of Western music, concert pitch is usually defined by saying that a pitch that sounds at 440 hertz is an "A", with all other pitches related to that A using equal temperament tuning.

Even though concert pitch is defined by the sound of an "A", instruments that read music at concert pitch are called C instruments. This is because the key of C is the "natural" key, the major key that has no sharps or flats, only natural notes. (You may wonder why A is not the natural key. As is true for so many aspects of music notation and theory, there is no logical reason; it is just a happenstance that arose out of the history of Western music.)

Transposing does not just change the written C, however; it changes every note. For example, a B flat instrument plays every note a whole step lower than written, not just the C. This means that if you want the clarinet player to play particular concert-pitch notes, you must write those notes one whole step higher than you would for a non-transposing instrument. 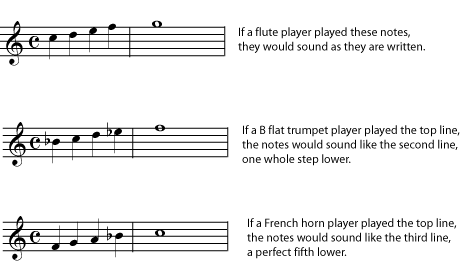 Some transposing instruments do not change key, but play an octave higher or lower than written.

There are also instruments that do not transpose but are also not considered C or concert-pitch instruments. Players of these instruments read concert-pitch music, but the instruments are considered to be fundamentally pitched on a note other than C. This is of very little practical importance, but is an issue that confuses some people, so let's take two examples. Soprano and tenor recorders, when all the finger-holes are covered (so that the air must go through the entire instrument), play a C. Alto recorders, when all the finger-holes are covered, play an F. Like B flat trumpets, this would seem to make alto recorder a good candidate to be a transposing instrument. If it were, a player could easily switch from one size recorder to another; a written C would have the same fingering on all instruments. But recorder history and tradition differ from trumpet history and tradition; so, although alto recorder can be considered to be "pitched in F", alto players learn to read at concert pitch, associating the fingerings with different notes than a soprano or tenor player would.

The second example is from brass instruments. The fundamental pitch of a woodwind (the recorder, for example) is considered to be the lowest note it can play when all holes are closed. The fundamental pitch of a brass instrument, on the other hand, is considered to be the fundamental of the harmonic series it plays when no valves are being used. For example, the C trumpet, using no valves, plays a harmonic series based on C, while a B flat (transposing) trumpet plays a B flat harmonic series. Tubas, on the other hand, can be based on several different harmonic series, including C, B flat, F, and E flat. But these are not necessarily transposing instruments. A tuba player playing a B flat instrument may read a transposing B flat part, or may read concert-pitch music and simply use different fingerings for the same note than a player on a C instrument.

Why are there Transposing Instruments

Things do run more smoothly when everyone agrees on the same name for the same sound. So why are there transposing instruments? The instruments that transpose an octave have either a very high or very low range. Transposition puts their written parts comfortably in the staff and avoids using too many harder-to-read ledger lines.

Other transpositions used to be for the convenience of the player, but are now mostly accidents of history. For example, there was a time when French horns, like harmonicas, came in every key, and could only play well in that key or closely related keys. French horn players could switch between different instruments playing what looked like the same set of notes, but which actually sounded in whatever key was needed. As the horn became capable of playing all notes equally well, the horn in F was the one that was chosen as having the nicest sound, so players still read parts in F.