Homeostasis and Regulation in the Human Body

The human body is made up of trillions of cells that all work together for the maintenance of the entire organism. While cells, tissues, and organs may perform very different functions, all the cells in the body are similar in their metabolic needs. Maintaining a constant internal environment by providing the cells with what they need to survive (oxygen, nutrients, and removal of waste) is necessary for the well-being of individual cells and of the entire body. The many processes by which the body controls its internal environment are collectively called homeostasis. The complementary activity of major body systems maintains homeostasis.

Homeostasis refers to stability, balance, or equilibrium within a cell or the body. It is an organism’s ability to keep a constant internal environment. Homeostasis is an important characteristic of living things. Keeping a stable internal environment requires constant adjustments as conditions change inside and outside the cell. The adjusting of systems within a cell is called homeostatic regulation. Because the internal and external environments of a cell are constantly changing, adjustments must be made continuously to stay at or near the set point (the normal level or range). Homeostasis can be thought of as a dynamic equilibrium rather than a constant, unchanging state.

The endocrine system plays an important role in homeostasis because hormones regulate the activity of body cells. The release of hormones into the blood is controlled by a stimulus. For example, the stimulus either causes an increase or a decrease in the amount of hormone secreted. Then, the response to a stimulus changes the internal conditions and may itself become a new stimulus. This self-adjusting mechanism is called feedback regulation.

Negative feedback is the most common feedback loop in biological systems. The system acts to reverse the direction of change. Since this tends to keep things constant, it allows the maintenance of homeostatic balance. For instance, when the concentration of carbon dioxide in the human body increases, the lungs are signaled to increase their activity and exhale more carbon dioxide, (your breathing rate increases). Thermoregulation is another example of negative feedback. When body temperature rises, receptors in the skin and the hypothalamus sense the temperature change. The temperature change (stimulus) triggers a command from the brain. This command, causes a response (the skin makes sweat and blood vessels near the skin surface dilate), which helps decrease body temperature. Figure 1 shows how the response to a stimulus reduces the original stimulus in another of the body’s negative feedback mechanisms. 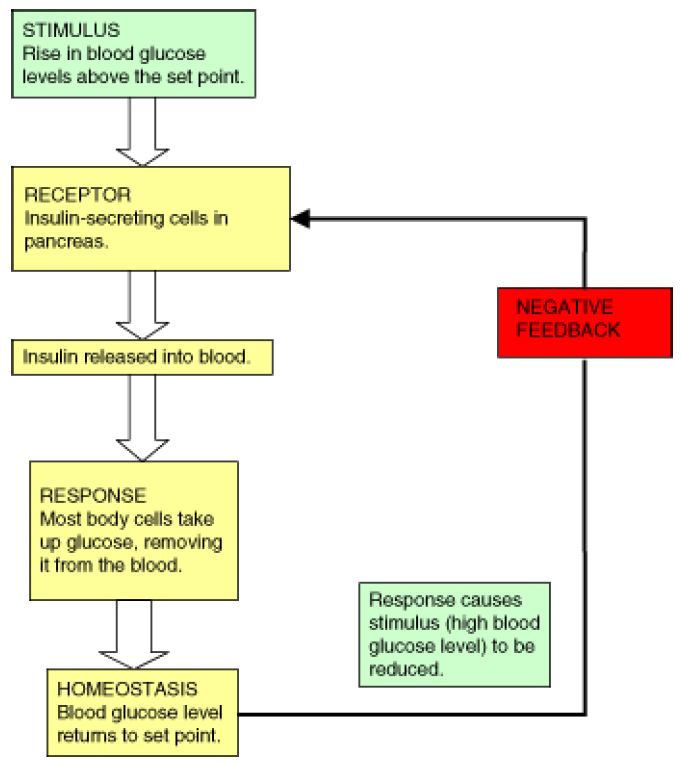 Not many feedback mechanisms in the body are based on positive feedback. Positive feedback speeds up the direction of change, which leads to increasing hormone concentration, a state that moves further away from homeostasis.

Each body system contributes to the homeostasis of other systems and of the entire organism. No system of the body works in isolation and the well-being of the person depends upon the well-being of all the interacting body systems. A disruption within one system generally has consequences for several additional body systems. Most of these organ systems are controlled by hormones secreted from the pituitary gland, a part of the endocrine system. Table 1 summarizes how various body systems work together to maintain homeostasis.

Main examples of homeostasis in mammals are as follows:

Table 1: Types of Homeostatic Regulation in the Body

The endocrine system, shown in Figure 2, includes glands which secrete hormones into the bloodstream. Hormones are chemical messenger molecules that are made by cells in one part of the body and cause changes in cells in another part of the body. The endocrine system regulates the metabolism and development of most body cells and body systems through feedback mechanisms. For example, Thyrotropin-Releasing Hormone (TRH) and Thyroid Stimulating Hormone (TSH) are controlled by a number of negative feedback mechanisms. The endocrine glands also release hormones that affect skin and hair color, appetite, and secondary sex characteristics of males and females. 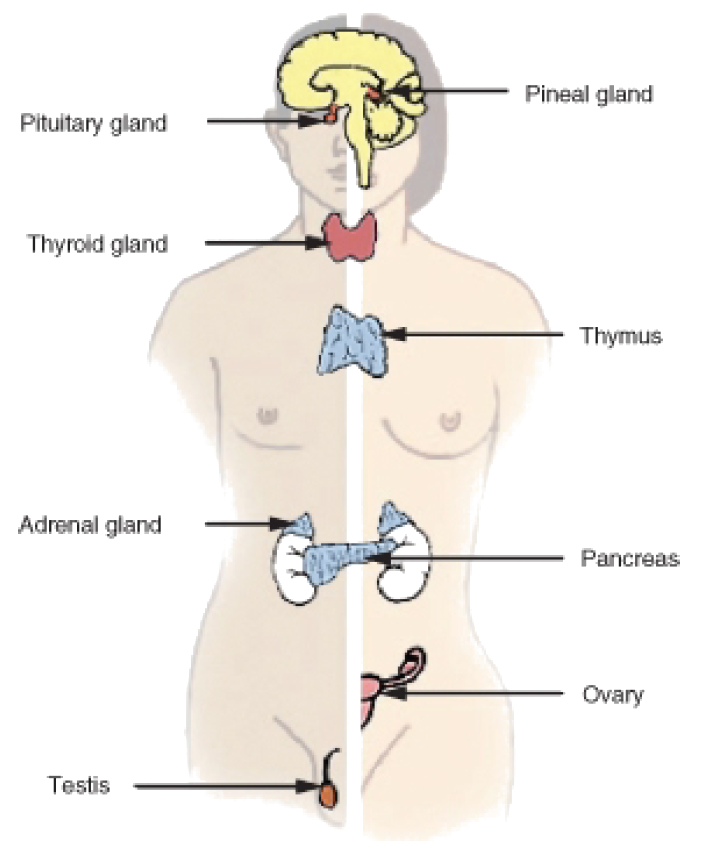 The endocrine system has a regulatory effect on other organ systems in the human body. In the muscular system, hormones adjust muscle metabolism, energy production, and growth. In the nervous system, hormones affect neural metabolism, regulate fluid and ion concentration and help with reproductive hormones that influence brain development.

Toxic wastes build up in the blood as proteins and nucleic acids are broken down and used by the body. The urinary system rids the body of these wastes. The urinary system is also directly involved in maintaining proper blood volume. The kidneys also play an important role in maintaining the correct salt and water content of the body. External changes, such as a warm weather, that lead to excess fluid loss trigger feedback mechanisms that act to maintain the body’s fluid content by inhibiting fluid loss. The kidneys also produce a hormone called erythropoietin, also known as EPO, which stimulates red blood cell production.

The reproductive system does little for the homeostasis of the organism. The reproductive system relates instead to the maintenance of the species. However, sex hormones do have an effect on other body systems, and an imbalance in sex hormones can lead to various disorders. For example, a woman whose ovaries are removed early in life is at higher risk of developing osteoporosis, a disorder in which bones are thin and break easily. The hormone estrogen, produced by the ovaries, is important for bone growth. Therefore, a woman who does not produce estrogen will have impaired bone development.

Many homeostatic mechanisms keep the internal environment within certain limits (or set points). When the cells in your body do not work correctly, homeostatic balance is disrupted. Homeostatic imbalance may lead to a state of disease. Disease and cellular malfunction can be caused in two basic ways: by deficiency (cells not getting all they need) or toxicity (cells being poisoned by things they do not need). When homeostasis is interrupted, your body can correct or worsen the problem, based on certain influences. In addition to inherited (genetic) influences, there are external influences that are based on lifestyle choices and environmental exposure. These factors together influence the body’s ability to maintain homeostatic balance. The endocrine system of a person with diabetes has difficulty maintaining the correct blood glucose level. A diabetic needs to check their blood glucose levels many times during the day, as shown in Figure 3, and monitor daily sugar intake. 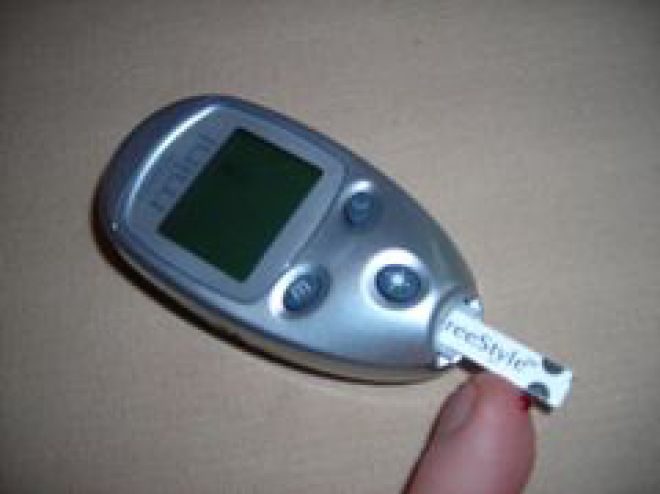 Figure 3: A person with diabetes has to monitor their blood glucose carefully. This glucose meter analyses only a small drop of blood.

Genetics: Genes are sometimes turned off or on due to external factors which we have some control over. Other times, little can be done to prevent the development of certain genetic diseases and disorders. In such cases, medicines can help a person’s body regain homeostasis. An example is the metabolic disorder Type 1 diabetes, which is a disorder where the pancreas is no longer producing adequate amounts of insulin to respond to changes in a person’s blood glucose level. Insulin replacement therapy, in conjunction with carbohydrate counting and careful monitoring of blood glucose concentration, is a way to bring the body’s handling of glucose back into balance. Cancer can be genetically inherited or be due to a mutation caused by exposure to toxin such as radiation or harmful drugs. A person may also inherit a predisposition to develop a disease such as heart disease. Such diseases can be delayed or prevented if the person eats nutritious food, has regular physical activity, and does not smoke.

Nutrition: If your diet lacks certain vitamins or minerals your cells will function poorly, and you may be at risk to develop a disease. For example, a menstruating woman with inadequate dietary intake of iron will become anemic. Hemoglobin, the molecule that enables red blood cells to transport oxygen, requires iron. Therefore, the blood of an anemic woman will have reduced oxygen-carrying capacity. In mild cases symptoms may be vague (e.g. fatigue), but if the anemia is severe the body will try to compensate by increasing cardiac output, leading to weakness, irregular heartbeats and in serious cases, heart failure.

Physical Activity: Physical activity is essential for proper functioning of our cells and bodies. Adequate rest and regular physical activity are examples of activities that influence homeostasis. Lack of sleep is related to a number of health problems such as irregular heartbeat, fatigue, anxiety, and headaches. Being overweight and obesity, two conditions that are related to poor nutrition and lack of physical activity greatly affect many organ systems and their homeostatic mechanisms. Being overweight or obese increases a person’s risk of developing heart disease, Type 2 diabetes, and certain forms of cancer. Staying fit by regularly taking part in aerobic activities such as walking, shown in Figure 4, has been shown to help prevent many of these diseases. 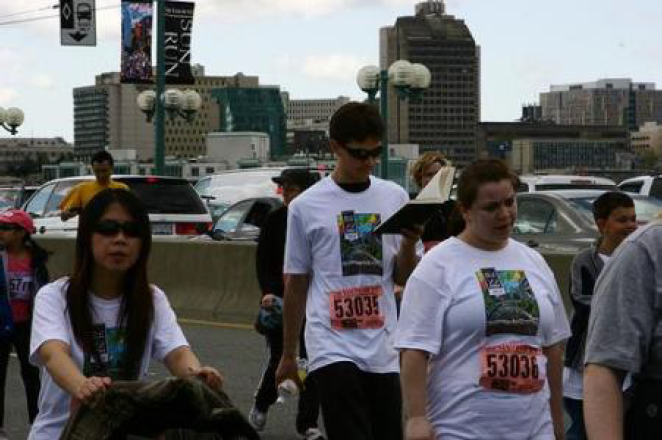 Figure 4: Adding physical activity to your routine can be as simple as walking for a total of 60 minutes a day, five times a week.

Mental Health: Your physical health and mental health are inseparable. Our emotions cause chemical changes in our bodies that have various effects on our thoughts and feelings. Negative stress (also called distress) can negatively affect mental health. Regular physical activity has been shown to improve mental and physical well-being, and helps people to cope with distress. Among other things, regular physical activity increases the ability of the cardiovascular system to deliver oxygen to body cells, including the brain cells. Medications that may help balance the amount of certain mood-altering chemicals within the brain are often prescribed to people who have mental and mood disorders. This is an example of medical help in stabilizing a disruption in homeostasis.

Any substance that interferes with cellular function and causes cellular malfunction is a cellular toxin. There are many different sources of toxins, for example, natural or synthetic drugs, plants, and animal bites. Air pollution, another form of environmental exposure to toxins is shown in Figure 5. A commonly seen example of an exposure to cellular toxins is by a drug overdose. When a person takes too much of a drug that affects the central nervous system, basic life functions such as breathing and heartbeat are disrupted. Such disruptions can results in coma, brain damage, and even death. 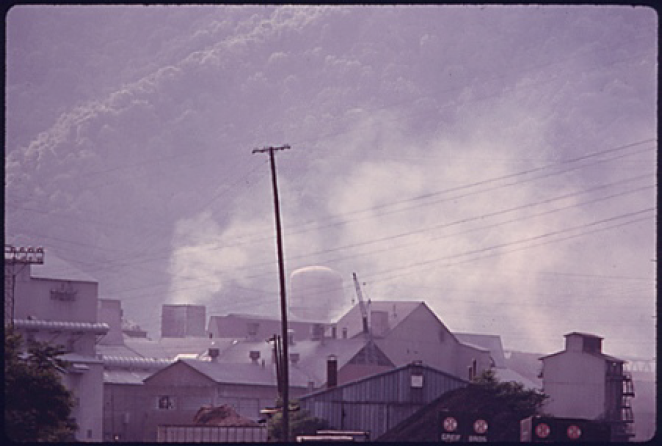 Figure 5: Air pollution can cause environmental exposure to cellular toxins such as mercury.

The six factors described above have their effects at the cellular level. A deficiency or lack of beneficial pathways, whether caused by an internal or external influence, will almost always result in a harmful change in homeostasis. Too much toxicity also causes homeostatic imbalance, resulting in cellular malfunction. By removing negative health influences and providing adequate positive health influences, your body is better able to self-regulate and self-repair, which maintains homeostasis.