Unlike energy, elements are not lost and replaced as they pass through ecosystems. Instead, they are recycled repeatedly. All chemical elements that are needed by living things are recycled in ecosystems, including carbon, nitrogen, hydrogen, oxygen, phosphorus, and sulfur. Water is also recycled.

Elements or water may be held for various lengths of time by different components of a biogeochemical cycle. Components that hold elements or water for a relatively short period of time are called exchange pools. For example, the atmosphere is an exchange pool for water. It holds water for several days at the longest. This is a very short time compared with the thousands of years the deep ocean can hold water. The ocean is an example of a reservoir for water. Reservoirs are components of a geochemical cycle that hold elements or water for a relatively long period of time.

Earth’s water is constantly in motion. Although the water on Earth is billions of years old, individual water molecules are always moving through the water cycle. The water cycle describes the continuous movement of water molecules on, above, and below Earth’s surface. It is shown in Figure 1. Like other biogeochemical cycles, there is no beginning or end to the water cycle. It just keeps repeating. During the cycle, water occurs in its three different states: gas (water vapor), liquid (water), and solid (ice). Processes involved in changes of state in the water cycle include evaporation, sublimation, and transpiration.

Figure 1: This diagram of the water cycle shows where water is stored and the processes by which water moves through the cycle, including evaporation, condensation, and precipitation.

The sun is the driving force behind the water cycle. It heats oceans, lakes, and other bodies of water, causing water to evaporate from the surface and enter the atmosphere as water vapor. Water in soil also evaporates easily. In addition, the sun heats ice and snow, causing it to turn directly into water vapor in the process of sublimation. Water also evaporates from the above-ground parts of plants. Transpiration is another process by which plants lose water. Transpiration occurs when stomata in leaves open to take in carbon dioxide for photosynthesis and lose water to the atmosphere in the process.

The water cycle plays an important role in climate. For molecules of liquid water to change to water vapor, kinetic energy is required, or the energy of movement. As faster-moving molecules evaporate, the remaining molecules have lower average kinetic energy, and the temperature of ocean water thus decreases. The primary way that oceans slow global warming is by heat uptake which warms ocean water and removes some energy from the atmosphere.

Rain that falls on land may either soak into the ground, which is called infiltration, or flow over the land as runoff. Snow that falls on land eventually melts, with the exception of snow that accumulates at high altitudes or near the poles. Like rain water, snowmelt can either infiltrate the ground or run off.

Runoff water from rain or snowmelt eventually flows into streams and rivers. The water is then carried to ponds, lakes, or the ocean. From these bodies of water, water molecules can evaporate to form water vapor and continue the cycle.

Runoff, streams, and rivers can gradually dissolve carbon in rocks and carry it to the ocean. The ocean is a major reservoir for stored carbon. It is just one of four major reservoirs. The other three are the atmosphere, the biosphere, and organic sediments such as fossil fuels. Fossil fuels, including petroleum and coal, form from the remains of dead organisms. All of these reservoirs of carbon are interconnected by pathways of exchange in the carbon cycle, which is shown in Figure 2. 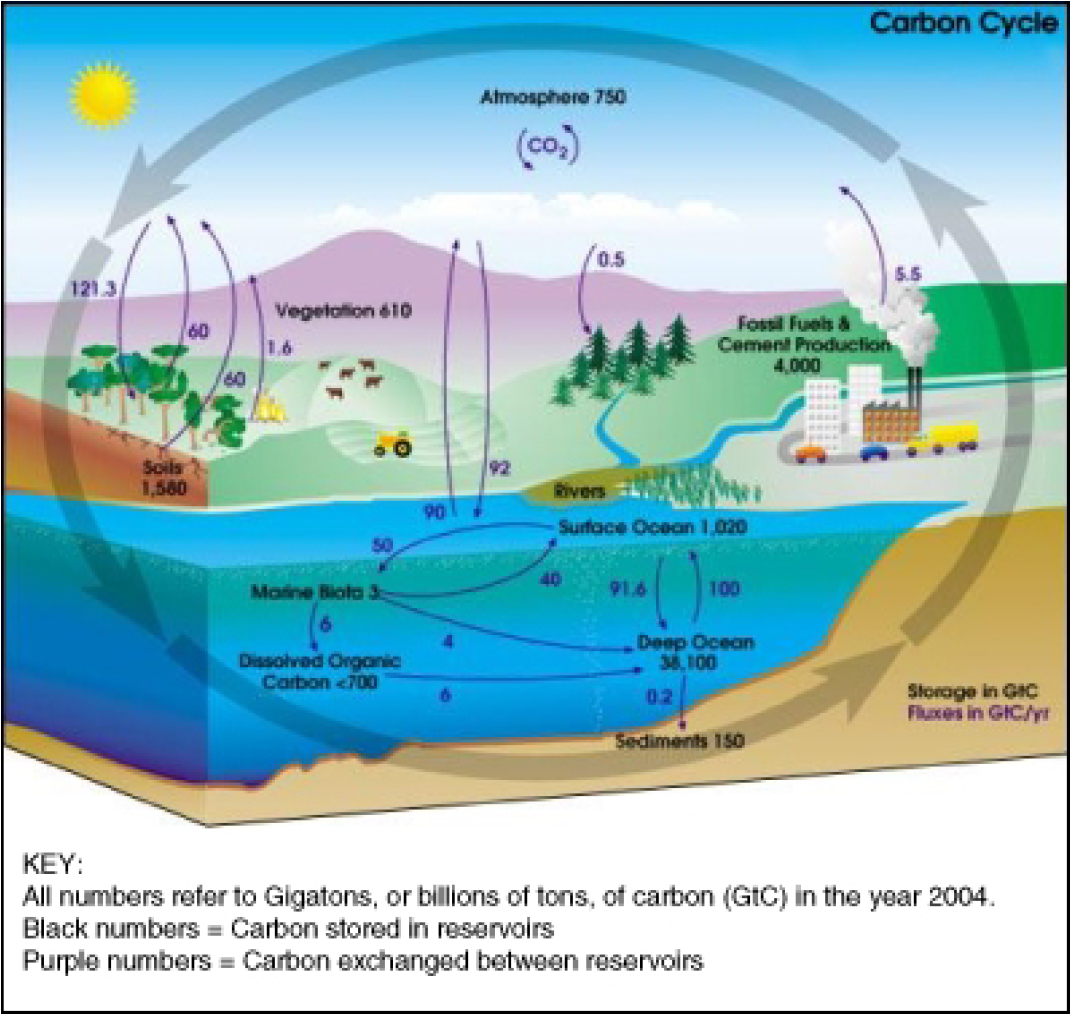 Figure 2: This drawing of the carbon cycle shows the amounts of carbon stored in and exchanged between carbon reservoirs on land and in water. Another 70 million GtC of carbon may be stored in sedimentary rock. If this is true, it would make sedimentary rock the greatest reservoir of carbon on Earth.

Carbon occurs in a various forms in different parts of the carbon cycle. Some of the different forms in which carbon appears are described in Table 1. Refer to the table as you read how carbon moves between reservoirs of the cycle.

Carbon in the Atmosphere

In the atmosphere, carbon exists primarily as carbon dioxide (\(CO_2\)). Carbon dioxide enters the atmosphere from several different sources, including those listed below. Most of the sources are also represented in Figure 2, and some are described in detail.

A much smaller amount of carbon in the atmosphere is present as methane gas (\(CH_4\)). Methane is released into the atmosphere when dead organisms and other organic matter decay in the absence of oxygen. It is produced by landfills, the mining of fossil fuels, and some types of agriculture.

The double-headed arrow indicates that the reaction can occur in either direction, depending on the conditions and the amount of carbon dioxide present. For example, the reaction occurs more readily in the left-to-right direction in cold water. As a result, near the poles, where ocean water is cooler, more carbon dioxide is dissolved and there is more carbonic acid in the water. Although carbonic acid is a weak acid, it is an important regulator of the acid-base (pH) balance of ocean water.

Carbonic acid, in turn, readily separates into hydrogen ions (\(H^+\)) and bicarbonate ions (\(HCO_3 ^−\)). This occurs in the following reaction:

Carbon in the Biosphere

Carbon in Rocks and Sediments

The geological pathway of the carbon cycle takes much longer than the organic pathway described above. In fact, it usually takes millions of years for carbon to cycle through the geological pathway. It involves processes such as rock formation, subduction, and volcanism.

As stated previously, most carbon in ocean water is in the form of bicarbonate ions. Bicarbonate ions may bind with other ions, such as calcium ions (\(Ca^+\)) or magnesium ions (\(Mg^+\)), and form insoluble compounds. Because the compounds are insoluble, they precipitate out of water and gradually form sedimentary rock, such as limestone (calcium carbonate, \(CaCO_3\)) or dolomite [calcium magnesium carbonate \(CaMg(CO_3 )_2\).

Dead organisms also settle to the bottom of the ocean. Many of them have shells containing calcium carbonate. Over millions of years, the pressure of additional layers of sediments gradually changes their calcium carbonate and other remaining organic compounds to carbon-containing sedimentary rock.

Carbon-containing rocks and sediments on the ocean floor gradually move toward the edges of the ocean due to a process called seafloor spreading. The rocks eventually reach cracks in the crust, where they are pulled down into the mantle. This process, called subduction, occurs at subduction zones. In the mantle, the rocks melt and their carbon is stored. When volcanoes erupt, they return some of the stored carbon in the mantle to the atmosphere in the form of carbon dioxide, a process known as volcanism. This brings the geological pathway of the carbon cycle full circle. 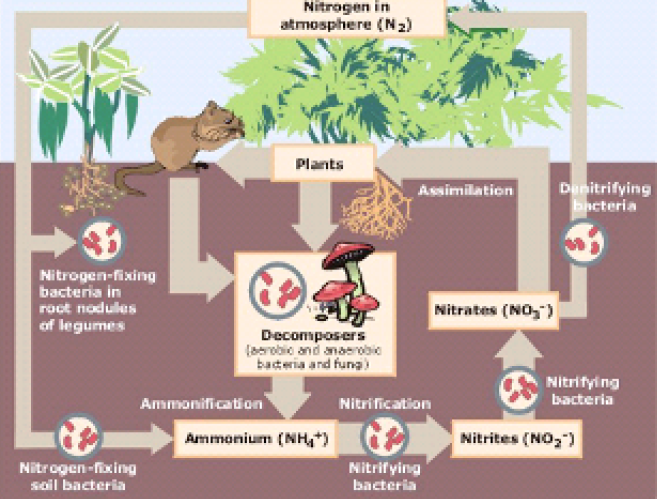 Figure 3: In a terrestrial ecosystem, the nitrogen cycle may include plants and consumers as well as several types of bacteria.

Plants and other producers use nitrogen to synthesize nitrogen-containing organic compounds. These include chlorophyll, proteins, and nucleic acids. Other organisms that consume producers make use of the nitrogen in these organic compounds. Plants absorb substances such as nitrogen from the soil through their root hairs. However, they cannot absorb nitrogen gas directly. They can absorb nitrogen only in the form of nitrogen containing ions, such as nitrate ions (\(NO_3 ^−\)).

The process of converting nitrogen gas to nitrate ions that plants can absorb is called nitrogen fixation. It is carried out mainly by nitrogen-fixing bacteria, which secrete enzymes needed for the process. Some nitrogen-fixing bacteria live in soil. Others live in the root nodules of legumes such as peas and beans. In aquatic ecosystems, some cyanobacteria are nitrogen fixing. They convert nitrogen gas to nitrate ions that algae and other aquatic producers can use.

Nitrogen gas in the atmosphere can be converted to nitrates by several other means. One way is by the energy in lightning. Nitrogen is also converted to nitrates as a result of certain human activities. These include the production of fertilizers and explosives and the burning of fossil fuels. These human activities also create the gas nitrous oxide (\(N_2 O\)). The concentration of this gas in the atmosphere has tripled over the past hundred years as a result. Nitrous oxide is a greenhouse gas that contributes to global warming and other environmental problems.

After being used by plants and animals, nitrogen is released back into the environment. When decomposers break down organic remains and wastes, they release nitrogen in the form of ammonium ions (\(NH_4^−\)). This is called ammonification. It occurs in both terrestrial and aquatic ecosystems. In terrestrial ecosystems, some nitrogen-fixing bacteria in soil and root nodules also convert nitrogen gas directly into ammonium ions.

Denitrification and the Anammox Reaction

In the ocean, another reaction occurs to cycle nitrogen back to nitrogen gas in the atmosphere. The reaction, called the anammox reaction, is enabled by certain bacteria in the water. In the reaction, ammonium and nitrite ions combine to form water and nitrogen gas. This is shown by the equation:

The anammox reaction may contribute up to half of the nitrogen gas released into the atmosphere by the ocean. The reaction may also significantly limit production in ocean ecosystems by removing nitrogen compounds that are needed by aquatic producers and other organisms.