Linnaeus established two kingdoms of organisms in his classification system: Plantae (the plant kingdom) and Animalia (the animal kingdom). Since then, scientists have repeatedly revised the Linnaean system. They have added several new kingdoms and other taxa. These changes were necessary as scientists learned more about life on Earth.

Table 1: Kingdoms in the Classification of Organisms

As more single-celled organisms were identified, many didn’t seem to fit in either the plant or the animal kingdom. As a result, scientists could not agree on how to classify them. To address this problem, in 1866, biologist Ernst Haeckel created a third kingdom for all single-celled organisms. He called this kingdom Protista. Figure 1 shows drawings that Haeckel made of several different types of protists as they looked under a microscope. The drawings show some of the diversity of microorganisms. 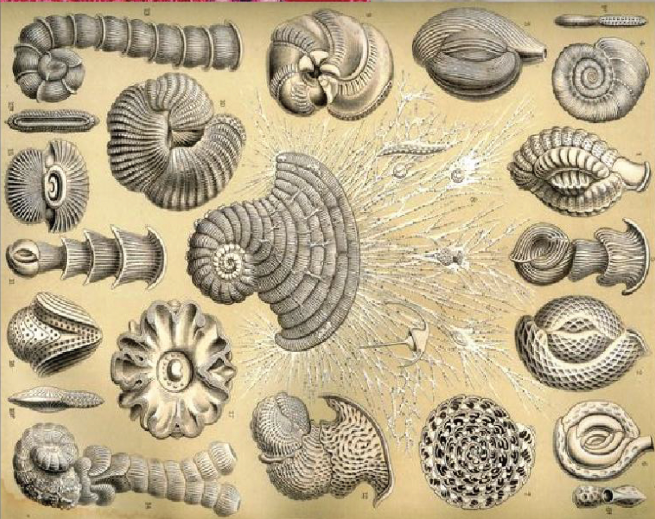 Figure 1: Diversity of Protists. Biologist Ernst Haeckel made these drawings of various types of single-celled organisms as viewed under a microscope. Based on his extensive knowledge of the diversity of microorganisms, Haeckel introduced a new kingdom just for single-celled life forms, called the protist kingdom. This was the first major change in the original Linnaean taxonomy.

The Bacteria Kingdom Haeckel’s protist kingdom represented all known single-celled organisms, including both bacteria and protozoa. In the early 1900s, scientists discovered that bacterial cells are very different not only from plant and animal cells but also from the cells of protists, such as protozoa. Figure 2 shows a bacterial cell, a protozoan cell, and an animal cell. When you compare the three cells, what differences do you see? The major difference is that, unlike the protozoan and animal cells, the bacterial cell does not contain a nucleus surrounded by a nuclear membrane. Instead, its DNA is found in the cytoplasm of the cell. Organelles in the bacterial cell also lack surrounding membranes. 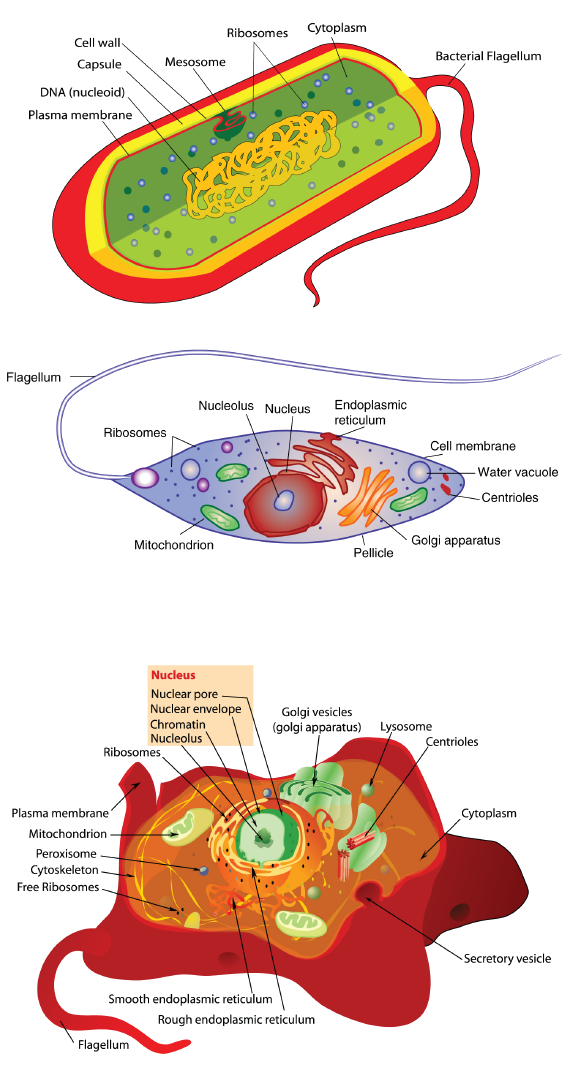 In the 1920s, microbiologist Edouard Chatton gave bacteria the name prokaryotes. He defined prokaryote as an organism whose cells lack nuclei. He gave the name eukaryotes to all other organisms. He defined eukaryote as an organism whose cells have nuclei. Chatton proposed placing prokaryotes and eukaryotes in a new taxon above the kingdom, called the superkingdom. However, this idea did not catch on, and most biologists continued to place bacteria in the protist kingdom.

Over the next several decades, scientists learned more about the tremendous number and diversity of bacteria. They started to see a need for a separate bacteria kingdom. By 1956, biologist Herbert Copeland proposed placing bacteria in a new kingdom called Monera. With the addition of the Monera kingdom, Linnaean taxonomy became a four-kingdom system (See Table 1).

Bacteria are the most numerous organisms on Earth. In a single gram of soil, there are typically 40 million bacterial cells. The human body also contains 10 times as many bacterial cells as human cells. Most of these bacteria are on the skin or in the digestive tract.

In the late 1960s, ecologist Robert Whittaker proposed adding a fifth kingdom to Linnaean taxonomy to represent fungi. Fungi are eukaryote organisms such as mushrooms and molds. Up until then, fungi had been classified in the plant kingdom. Whittaker separated fungi from plants on the basis of differences in metabolism. Plants make their own food in the process of photosynthesis, whereas fungi obtain nutrients by breaking down dead organisms. Separating fungi from plants resulted in five kingdoms, which are illustrated in Figure 3. The five-kingdom system soon became widely accepted. 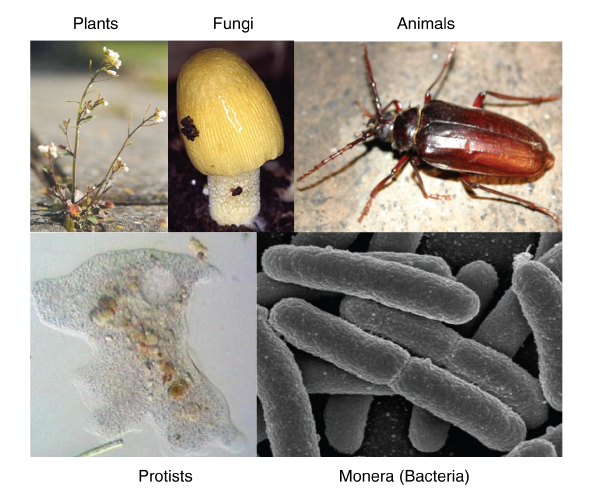 Figure 3: This five-kingdom system of classification was proposed by ecologist Robert Whittaker in the late 1960s. Whittaker added the Fungi kingdom to the earlier four-kingdom classification system.

By the 1970s, scientists had started to classify organisms in ways that reflected evolutionary relationships. They had also started using nucleic acid base sequences to identify these relationships. Nucleic acid sequence data are especially useful for studying bacteria. These organisms are so small that they have few physical traits.

Studies have bacterial nucleic acid sequences have yielded some surprising results. For example, in their research on ribosomal RNA base sequences, microbiologist Carl Woese and his colleagues discovered that bacteria actually include two very different groups of organisms. They called the two groups Eubacteria and Archaebacteria. Examples of organisms from each group are shown in Figure 4. Although the two types of organisms are similar in appearance, their ribosomal RNA sequences are very different. In 1977, Woese and his colleagues suggested that the original bacteria kingdom should be divided into two new kingdoms, called Eubacteria and Archaebacteria. This resulted in a six-kingdom taxonomy that has been widely accepted for many years.

Figure 4: Left, Eubacteria (now called Bacteria), Right, Archaebacteria (now called Archaea). Appearances can be deceiving! These two microorganisms are very different from one another, despite their outward similarities. Both organisms used to be classified in the bacteria kingdom. Woese suggested placing them in different kingdoms, called the eubacteria and archaebacteria kingdoms.

Woese wasn’t completely happy with the six-kingdom system. It didn’t show that all four eukaryote kingdoms are more closely related to each other than to the two bacteria kingdoms. It also didn’t show that the two bacteria kingdoms are as different from each other as they are from the eukaryote kingdoms. To show these similarities and differences, Woese introduced a new taxon called the domain. He defined domain as a taxon higher than the kingdom.

In 1990, Woese and his colleagues proposed a new classification system containing three domains: Bacteria, Archaea, and Eukarya. As shown in Figure 5, the Bacteria domain was formerly the Eubacteria kingdom, and the Archaea domain was formerly the Archaebacteria kingdom. The Eukarya domain includes all four eukaryote kingdoms: plants, animals, protists, and fungi. The three-domain system emphasizes the similarities among eukaryotes and the differences among eukaryotes, bacteria, and archaea. By using domains, Woese was able to show these relationships without replacing the popular six-kingdom system.

Archaea were first found in extreme environments. For example, they were found in the hot water geysers in Yellowstone National park. Archaea have since been found in all of Earth’s habitats. They are now known to be present everywhere in high numbers. They may contribute as much as 20 percent to Earth’s total biomass.

Woese’s three-domain system was quickly adopted by many other biologists. There were some critics, however, who argued that the system put too much emphasis on the uniqueness of Archaea. Later studies confirmed how different Archaea are from other organisms. For example, organisms belogning to Archaea were found to differ from both Eukarya and Bacteria in the composition of their cell membranes and the system they use for DNA replication. These differences convinced most critics that the three-domain system was justified. After its introduction in 1990, the three-domain system became increasingly popular. Within a decade of its introduction, it had largely replaced earlier classifications.

How Are the Three Domains Related?

Comparing ribosomal RNA base sequences, Woese and his colleagues also showed that organisms belonging to Eukarya are more similar to Archaea than they are to Bacteria. Figure 6 is a phylogenetic tree based on their analysis. This tree places Archaea and Eukarya in the same clade. It represents the hypothesis that Archaea and Eukarya shared a more recent common ancestor with each other than with Bacteria.

The results of a study published in 2007 seem to conflict with this hypothesis. Comparing DNA base sequences, the 2007 study suggested that the domain Archaea may be older than either Bacteria or Eukarya. That would make Archaea the most ancient group of organisms on Earth. It is not yet known, which, if either, hypothesis is correct. Scientists need to learn more about Archaea and their relationships with other organisms to resolve these questions. 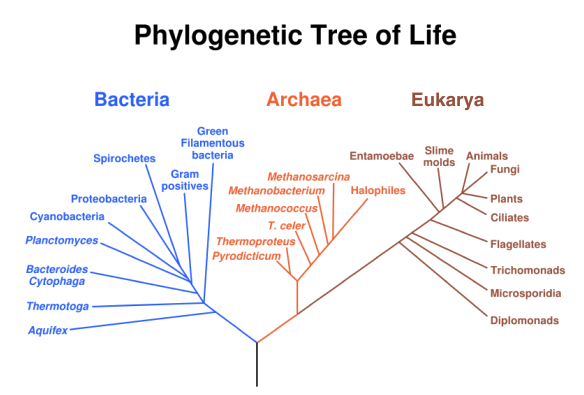 Figure 6: This phylogenetic tree is based on comparisons of ribosomal RNA base sequences among living organisms. The tree divides all organisms into three domains: Bacteria, Archaea, and Eukarya. Humans and other animals belong to the Eukarya domain. From this tree, organisms that make up the domain Eukarya appear to have shared a more recent common ancestor with Archaea than Bacteria.

The Future of Classification

A recent discovery illustrates this point. In 2003, scientists identified a new virus called mimivirus. It resembles bacteria in size and number of genes. However, the virus cannot respond to stimuli or grow by cell division, both of which are traits of bacteria and other living organisms. Mimivirus’ unique combination of traits seems to place it at the boundary between living and nonliving things. Some scientists think mimivirus might represent a new domain of life.

Table and Images courtesy of: